When I first began to explore the history of Toronto’s Don River Valley five years ago, the story of the major highway that runs through the valley failed to capture my imagination. I was interested in the effects of highway construction upon the ecology and the social history of the valley, but the story of the highway itself and how it came into being seemed less than compelling in comparison to the many other stories the valley had to tell. Somehow I managed to write an entire dissertation with only the smallest of nods to this major feature in the valley’s history. Preparing a book manuscript on the subject, however, demanded I give the parkway its due.

After several months of research on the subject I can’t imagine telling the history of the valley without it. The construction of the Don Valley Parkway between 1958 and 1967 not only transformed valley ecosystems, it was also the latest and grandest iteration of a long history of corridor uses, from the use of the river by aboriginal travellers and voyageurs in the eighteenth century, to dreams of a shipping corridor from Lake Ontario to Bloor Street in the 1870s and 80s, to the creation of a rail corridor through the valley in the 1890s.

The term “parkway” has been stretched and repurposed multiple times to describe radically different aesthetic and material environments. It was first used in the late 1860s by landscape architect Frederick Law Olmsted and his partner Calvert Vaux to describe the landscaped boulevards they incorporated into plans for Brooklyn’s Prospect Park. Designed to connect urban park lands with other parts of the city, these “pre-automobile” parkways functioned simultaneously as low-speed transportation corridors and recreation areas. In the early 1900s, the term was adapted to describe modern roadways that were both recreational landscapes and automobile thoroughfares at once. With their grade-separated intersections, limited-access design, and curving alignments designed to work with rather than against surrounding landscapes, parkways promised to be safer, faster, and more aesthetically pleasing than conventional roadways. From the mid-1910s to the mid-1930s, parkways were widely considered to be the most advanced motorways in the world, and a “parkway-fever” gripped areas like New York State as a solution to traffic congestion and a vehicle for suburban expansion.

The DVP was a late addition in the history of parkway developments in North America. While parkways continued to be built as recreational roadways for national parks in the US and Canada in this period, and in places like Canada’s capital region, for the most part they had fallen out of favour in North American urban and suburban contexts by the mid-1950s. Demands for higher speed and greater efficiency, combined with safety concerns, prompted a shift towards high-speed urban expressways, freeways, and interstates. Within this context, the DVP is best understood as a hybrid, retaining certain aspects of the parkway form—a curving alignment, slower maximum speed (6o mph in 1967), and attractive landscape design—while functioning essentially as a commuter highway. The Taconic and Garden State parkways constructed in the US around this time, and the Conestoga Parkway in Waterloo, attempted a similar balance of priorities.

The culmination of almost half a century of predecessor plans (the first vision of a roadway through the Don Valley proposed as early as 1914), the DVP was a product of a particular period in the city’s political history. The establishment of the Municipality of Metropolitan Toronto in 1953, with its considerable borrowing powers and broad jurisdictional reach, enabled large infrastructure projects in the Toronto area. Where past regional projects (including expressway networks and green belts) had succumbed to jurisdictional fragmentation and penny-pinching, Metro in effect made the DVP and other region-wide initiatives a reality. 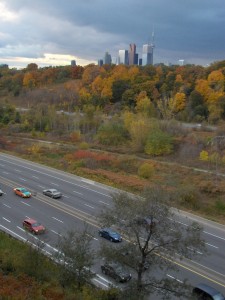 The role of Metro’s influential founding chair, Frederick Gardiner, is fundamental to this story. Gardiner’s biographer Timothy J. Colton observed that Gardiner, from his first days as Metro Chair, was possessed with an “unalloyed fascination with the thought of building multilane highways of modern design along the lakeshore, up the two main ravine ways leading from the city core, and anywhere else city and county engineers wanted to put them.” Gardiner didn’t waste any time getting expressways onto the Metro agenda, and in 1953 and ‘54, Metro road engineers worked to sketch out a framework of arterial roads for the expanding metropolis. Their plan envisioned two radial expressways stretching out from the downtown core in north-east and north-west trajectories (the Don Valley Parkway and the Spadina Expressway), and two lateral expressways: the Lakeshore Expressway running along the waterfront, and the Eglinton Avenue crosstown expressway bounding the city core. The Lakeshore Expressway was to receive first priority, followed by the Spadina Expressway and then the Don Valley Parkway. Resistance from area municipalities and waning public support for expressway development in the 1960s saw most of these projects abandoned; after the Lakeshore (Gardiner Expressway), the DVP became Metro’s second, and last, expressway project seen through to completion.

The history of false starts, adjustments, and ideological disputes in building the DVP is mostly available through publicly-accessible records: the minutes of Metropolitan and Toronto-area councils, planning department and roads committee records, consulting reports, and contemporary newspaper records. Other aspects of the story have been more difficult to piece together. Indeed, one of the challenges in writing about such a fixture in the urban landscape—like many historical subjects that hold a firm place in the public imagination—is the anecdotal stories it attracts, and the murkiness of their origins in the public record. In my case, puzzling out the degree to which local developers influenced the route of the parkway, and the timing of its construction, has been a challenging task. E.P. Taylor, horse-racing tycoon, financier, and developer of Toronto’s Don Mills subdivision in the early 1950s, was reputed in local history sources not only to have “requested” the parkway development in order to service his future subdivision, but also to have been the main proponent behind the alteration of the parkway’s route from Don Mills Road (a route that would have divided Taylor’s subdivision) to the Woodbine Avenue right-of-way further east. Months of digging into the public record on the history of the parkway, and letters to the urbanists and local historians who advanced this interpretation of events, have failed to produce any evidence of Taylor’s involvement (though surely, reason holds, he would have had every interest in pressuring Metro Council to reroute the road). I now sit waiting for an FOI request to be approved in order to review Gardiner’s correspondence on the parkway, in hopes of that “aha!” For Toronto historians reading this post: any leads gratefully accepted!

The parkway and its history have much to tell us, I have learned, about the way the river valley has influenced the development of the city, and how the city’s development in turn has influenced the valley. Valley geographies affected the placement not only of the road itself, but of the necklace of suburban developments that stretched north and east along its route. By taking advantage of a natural corridor through the valley bottom, parkway planners, in turn, consigned valley lands to a particular future. Products of the parkway—the run-off it sends into storm sewers, and from there into the river, the animal life it destroys in collisions, the limited human access to the river it affords, and the constant hum of sound it emits—continue to affect the integrity of valley ecosystems, and the quality of human experience in one of the city’s largest green spaces. As a researcher, uncovering the story of the parkway’s development has opened up new ways of exploring and understanding urban environments, and further illuminated some of the recurring themes in the history of the Don Valley.

Originally published for The Otter

Tags: Don River Valley, Environmental History, The Otter, Toronto
← On Oral History and the Presence of the Past
Thinking with Bees →